Protecting flange faces is more important today than ever. Replacement and resurfacing costs alone can be a huge expense to a project. Associated cost like downtime, additional labor, and delay of projects cannot only hit your bottom line but also diminish your credibility with your customer. We at P3 have decided to address this important, but often overlooked area of pipe and plant fabrication. Our flangeDOTS are an adhesive flange protector designed to protect the raised face surface during media blasting and painting. 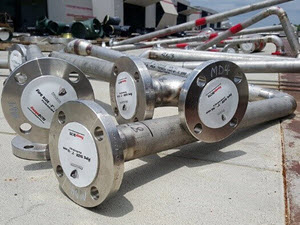 flangeDOTS began in 2013 as a request by a customer to come up with something that would better protect the raised faced surface of a flange during sandblasting and paint and speed up what was the inefficient masking process of using strips and multiple layers duct tape to cover the flange face. In its original form flangeDOTS were able to resist the media blast and the industrial paints and coating process. It gave a nice professional paint edge and there was no need to re-tape after blasting before paint.

A few months later, we noticed that some customers would leave the flangeDOTS on the pipe spools and equipment while they were being stored outside awaiting assembly. The flangeDOTS were preserving the flange face from light mechanical damage but more importantly were sealing the flange face from corrosion and protecting the interior of the pipe spools, vessels, valves and equipment, keeping unwanted debris and moisture out of the interiors.

flangeDOTS have a proprietary water-based adhesive that leaves no residue behind after removal. It is safe for all applications including steel, stainless steel, and specialty metals and has now become the industry favorite for protecting the raised faced surface for a flange. In early 2015, adjustments were made to the thickness and formula for the flangeDOTS and a Mylar backer replace the original paper backer for better performance in humid and moist climates.

In mid-2017, a customer called us and explained that they loved flangeDOTS and their process required them to leave the flangeDOTS on until just before final bolting to help prevent flange damage. The unintentional result was flangeDOTS occasionally were left on the flange during final assembly and bolting causing a restriction in the piping system. They asked us to devise a system by which they could determine if there were flangeDOTS on the flange prior to final bolting during the assembly process. Thus, the invention of the flangeDOT + tag was born. The addition of this new product changed our current procedure for complete flange protection and preservation. The new procedure is: install a standard flangeDOT prior to blast and paint. After blast and paint when the item makes it to the assembly area the original flangeDOT is removed and an inspection of the flange face is performed. If the flange passes inspection, a rust inhibitor P3-CI and a flangeDOT + Tag is then applied to the flange face along with a flangeBUMPER and multiNUTS.

Flange protection and preservation is what we do here at P3. We help oil and gas related companies protect assets while increasing throughput, with innovative preservation products and processes so you can build more in less time. We are a solution based company with a team of experts that will help you protect and preserve your critical surfaces and increase profits.

Get A Quote Now

Our #1 priority is that you become more productive & profitable. Please fill out this form, & our team will get back to you shortly.

We are committed to developing & supplying products that will save you time, save you money & help you produce a better quality product.

Get A Quote FAQ